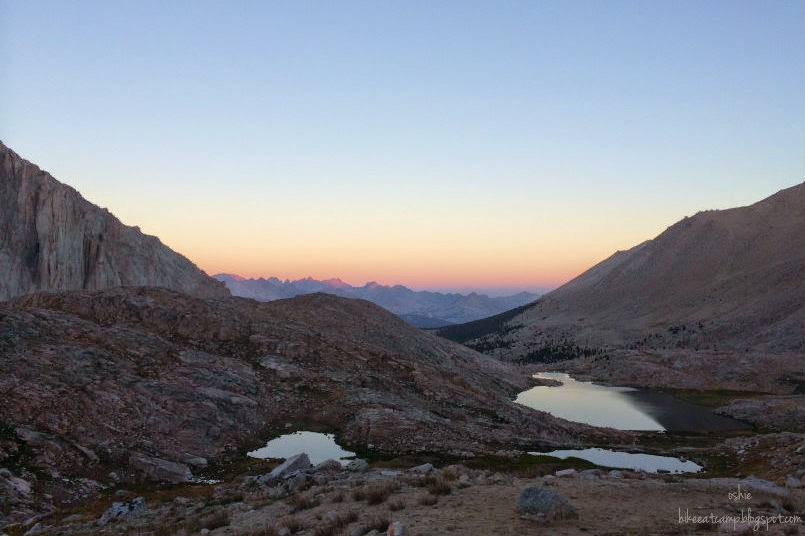 The sun had barely started to come out when we set out back on the trail and yet the the trail has already been busy with hikers quietly shuffling their feet, stepping one foot after the other since dark. Summit Day! 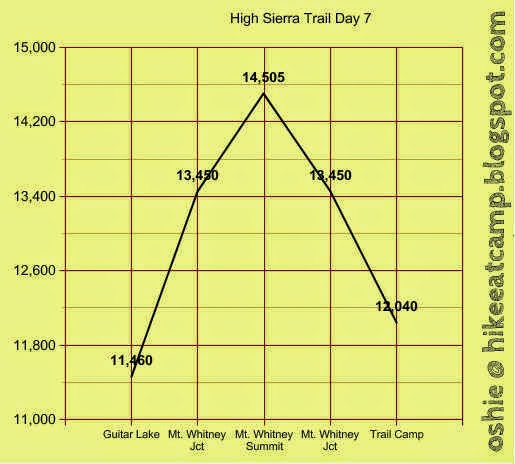 Our dawn breakfast earlier of the usual oatmeal and coffee were spent watching bobbing lights making their way from Guitar Lake up the numerous switchbacks to the Mount Whitney Junction.

The trail continues along passing Guitar Lake and a couple of smaller lakes. There are a few small flat spots scattered around the area to pitch up a tent if one decides to stay further past Guitar Lake, before starting the laborious trek up. More distance today means less distance for tomorrow! If one prefers.

Not much can be said on this part of the trail but that it is going up, up, up.. and rocky! It was a slow procession for us. The series of switchbacks seemed endless and had me wondering if the 2 crows that kept circling above our heads are waiting for us to drop dead already, so they can swoop in on us for breakfast! Unfortunately for them though, they circled for nothing. We made it at the junction tired of walking up, but alive. They'll have to look for another meal! Ha! *shakes fist at crows* 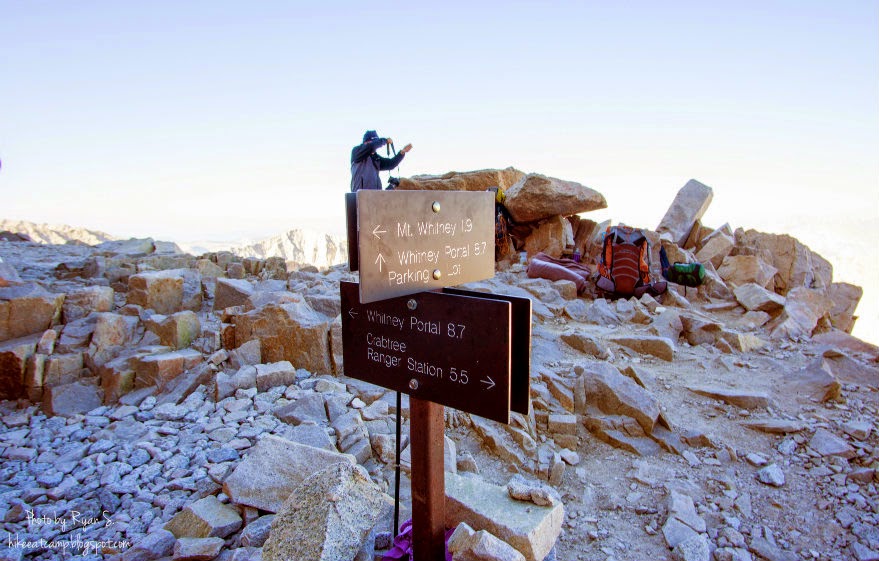 Like many others who arrived before us, we dropped our packs at the junction to climb our way to the summit pack-free (some do prefer to bring their pack all the way, quite a few though). A lot of packs were tossed to the side by other backpackers, but everyone was responsible and considerate that no packs were in anyone's way. That was one of my fears on this part: disorganized packs thrown everywhere that I'd feel bad adding my pack to a mess and would have no option but to bring my pack up to Whitney then back down the same way. I like having options. 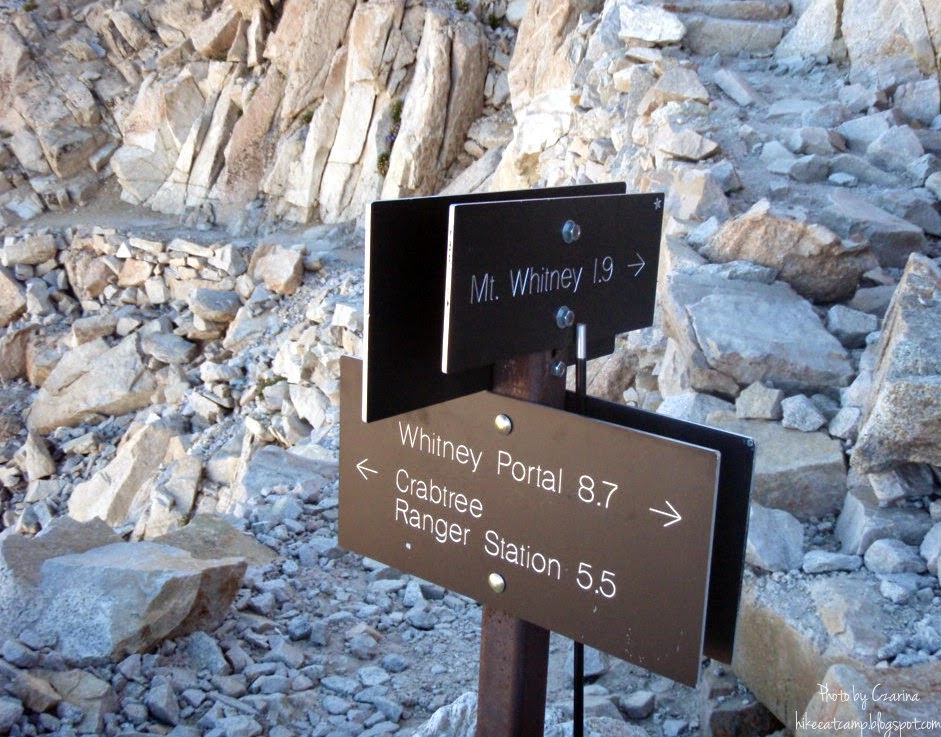 We minimized our belongings on this part of our hike, we started our rocky, gravelly ascent to the summit.  The quick rest by our packs was a good idea, it was a continuous hike up. We ambled our way on rocky terrain, best paying attention where we were stepping lest we roll an ankle so close to the summit, and so close to the end of the trip! 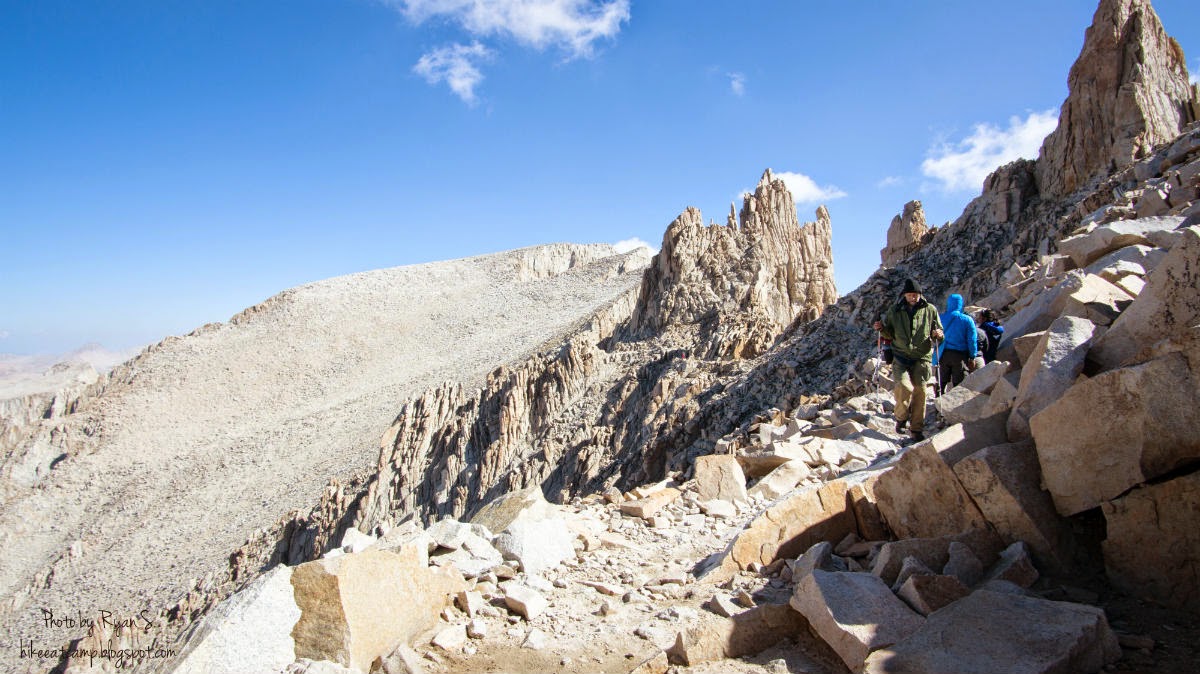 I know posts after posts I've said it before but yes, you're gonna read it again: the views were spectacular! We've lost the greenery from trees, meadows.. they've been replaced by gorgeous blue alpine lakes contrasted against the beige of the rocks and back dropped with a gorgeous blue sky. Yup, it's a good day to summit. 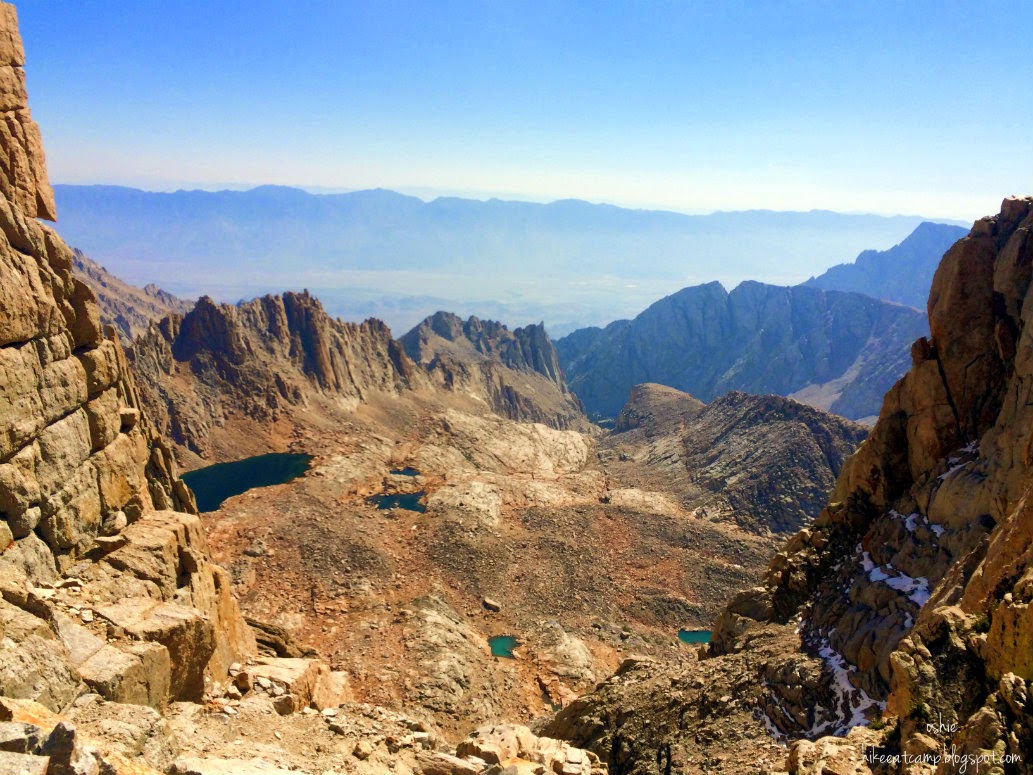 I'm not one to make phone calls when in the wilderness. Most of the places we go to, we can't anyways, it's devoid of any cellular signal. But along this trail, there's a section that even weak ATT has a spot, 4G to boot! Right by, what I overheard hikers call, the "two windows". We took the opportunity and called Kari to recap and catch any changes when she picks us up the next day. A rare moment I was grateful for cell signal in the backcountry! 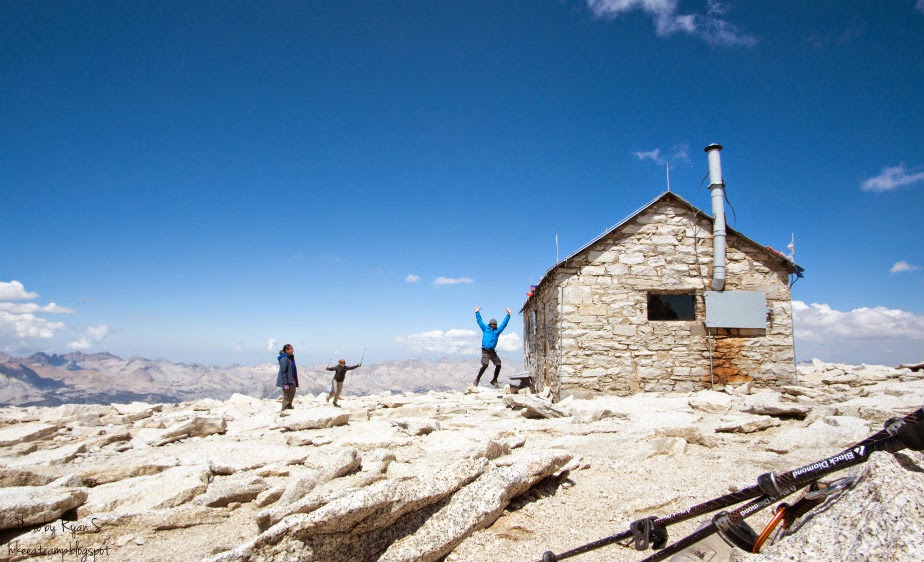 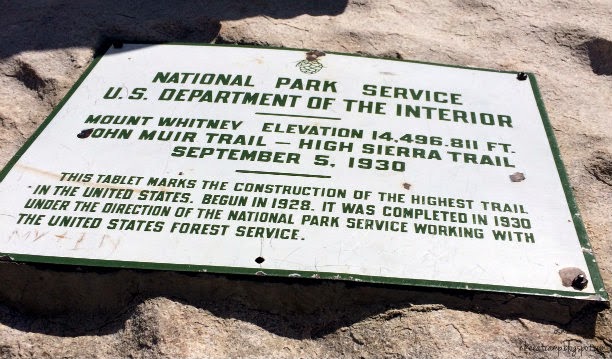 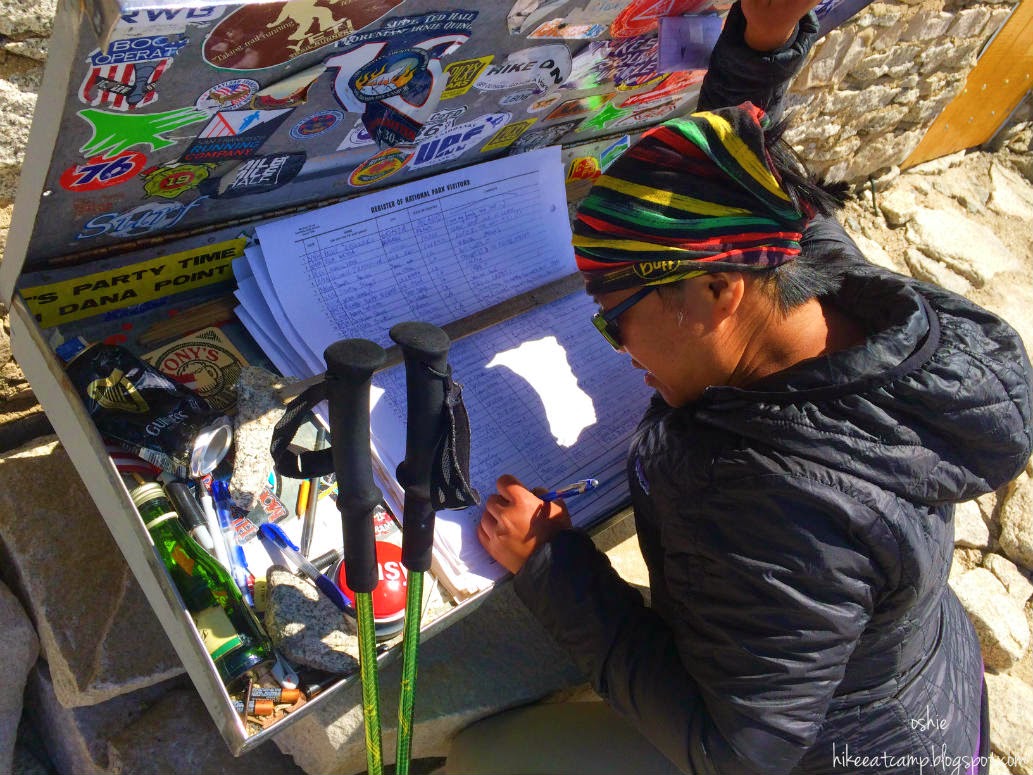 We reached the summit before lunch. Deliriously happy we all made it together. We were fortunate the summit was not crowded, as we met lots of people already heading down on our way up. Perks of starting later than everyone else, maybe? Lunch was forgotten but not photos. It was a photo overload moment!

We signed the summit register located next to the hut and milled around a bit.

Opening the summit register was like opening up a school desk in an art class! So much colorful stickers adorned the inside of the summit register (though not too happy with some that seem to be just trash), even found a Staples Easy Button in there! After reaching the top, press "That was easy!" and pat yourself on the back. Haha.


The next wave of hikers reaching the summit started trickling in just as a huge drone swept by above our heads. We took that as a cue to head back down and begrudgingly claim our packs down at the junction. Hiking pack-free was short-lived.

Arriving at Trail Crest, we noted how easily we're going downhill and the consideration to make it to Whitney Portal that same day, no matter how late, became stronger. Until we started getting closer to Trail Camp. Knees have started to become bothersome from all the downhill steps just as the weather started making a turn from sunny to cloudy to rain to small hail. And here we thought we got all the wet weather out of the way already! 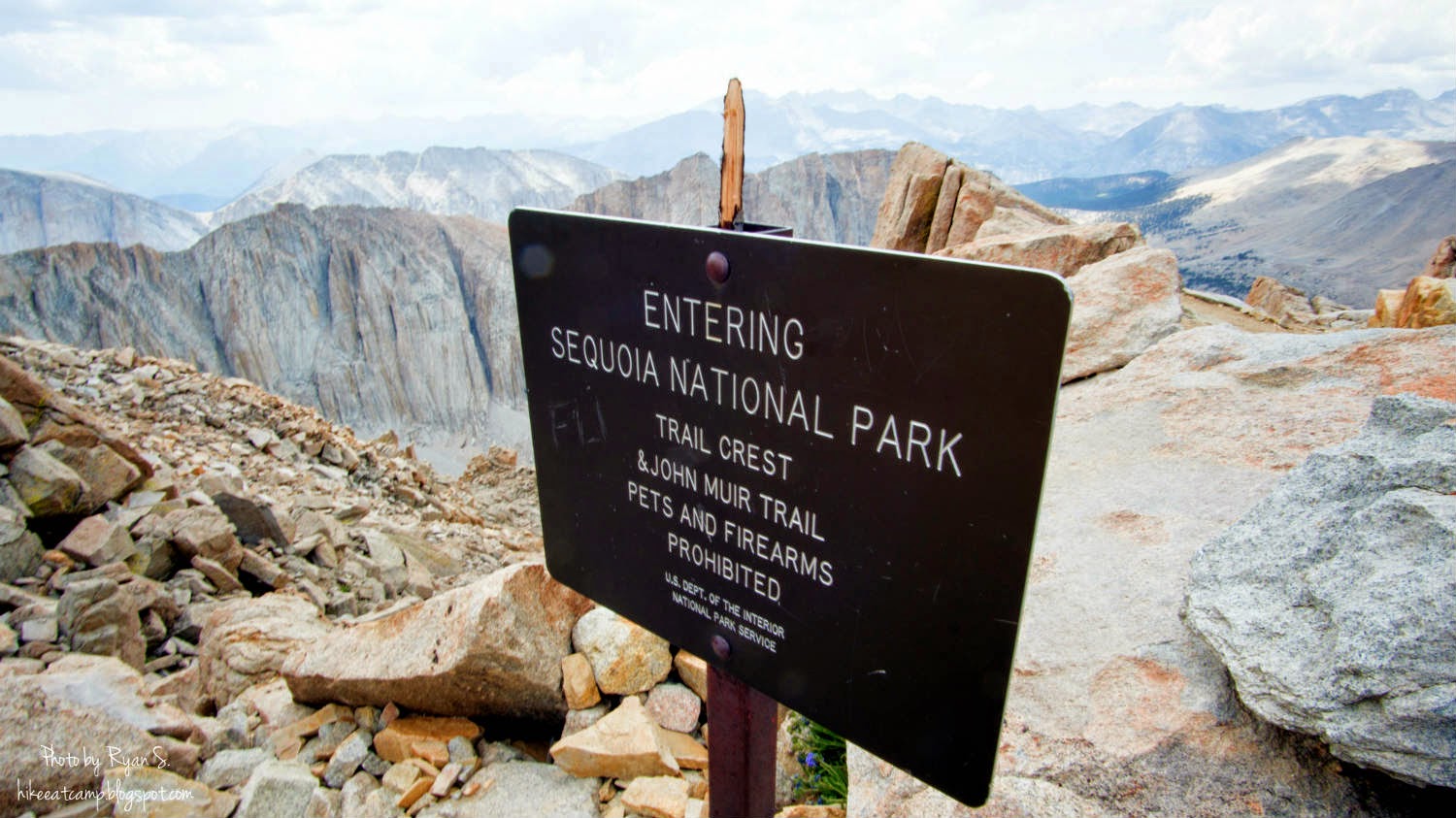 Resolving to stay at Trail Camp, not even making out to Outpost, we hurriedly pitched our tents against the pelting rain. Burgers and beers will have to wait another day.

Trail Camp has several flat spots to camp scattered about. Marmots abound this area, so best be careful not to leave your food unattended, not even for a second! The area is pretty exposed, not one tree around. And the area is pretty crowded, from day hikers, Whitney Trail campers, and other thru-hikers. Bathroom breaks sure were a challenge! People coming down can see you, people coming up can see you, people around you can at least see your head when you're squatting.. not to mention the many marmots that will unabashedly stare at you!

There are no bear box/ food lockers around for convenience which is a good idea, I can just imagine it being abused considering the busyness of the area. There is a small lake for water source. And plenty of rocks to utilize from camp stakes, hammers, camp chairs, camp tables, etc.. 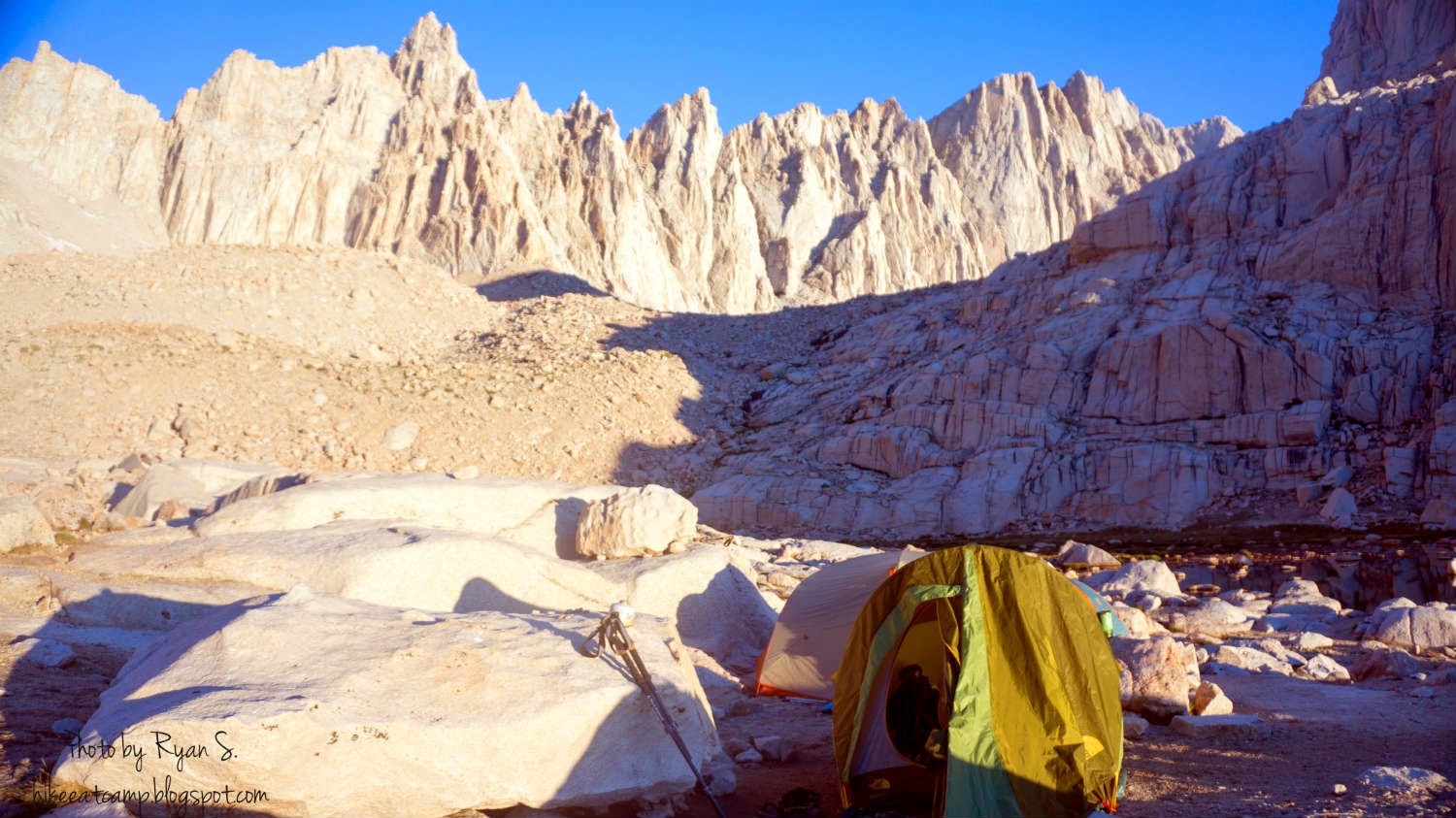 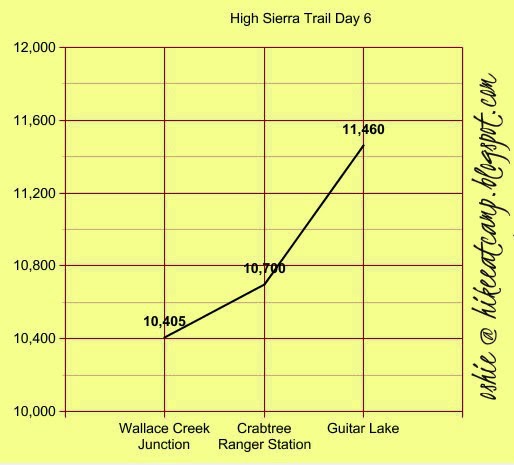 We awoke the next morning, eager to get a head start. We're so close to Mount Whitney, we can smell it! One more day. It was a gorgeous morning. The sun was out and it was a blue bird sky.

We hopped back on the trail, no hikers have passed by our little clearing trail side just yet. It wasn't long till the trail opened up to a wide creek. We weren't too far off from yesterday's targeted destination! The trail continues on the other side of Wallace Creek. 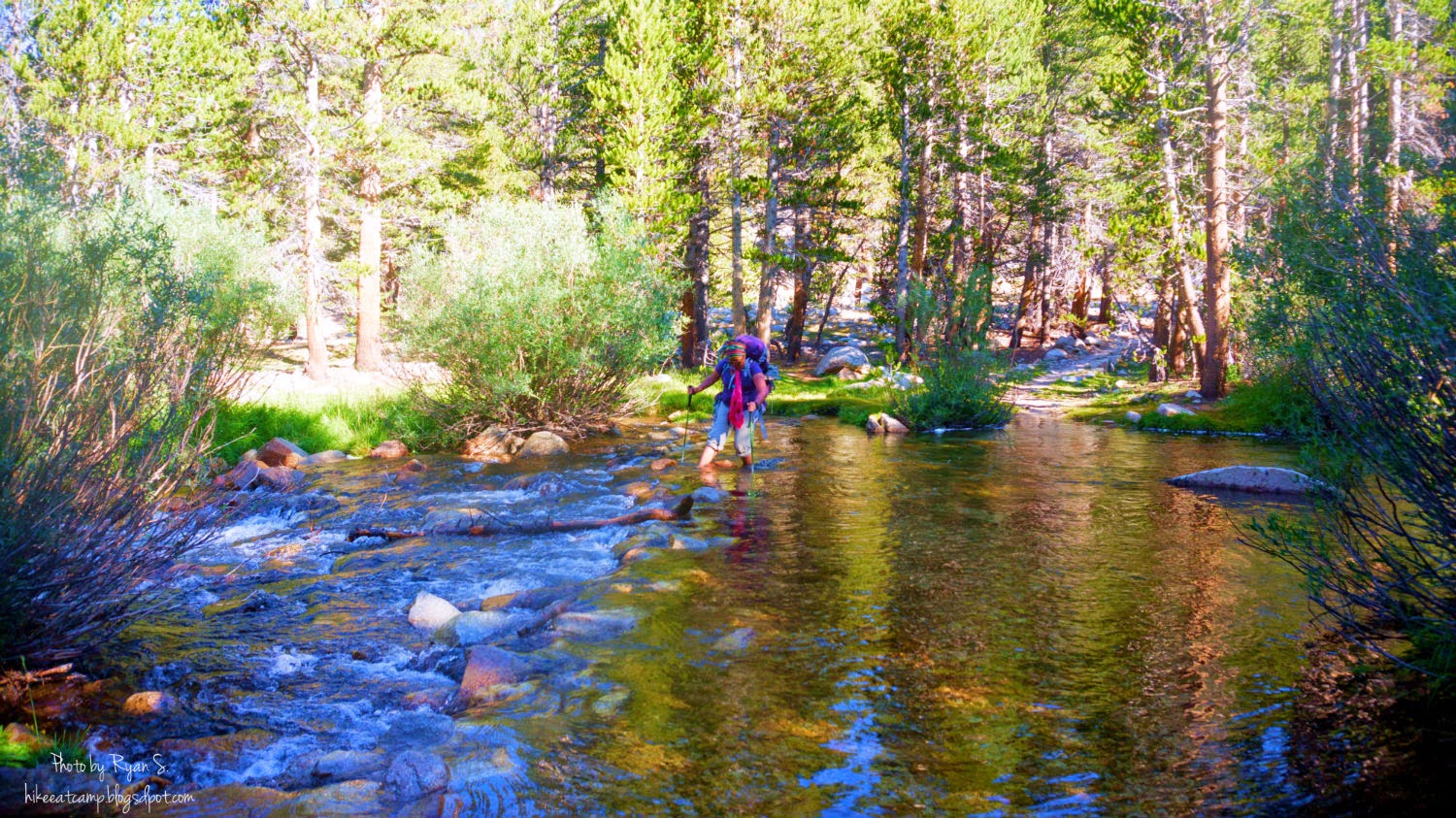 We waded our way through. And once at the other side, we looked around; sitting and drying our feet, campers were scattered all around. We greeted some morning cheers to some campers we recognized from the camp at Kern. We didn't get to inspect around the area but quickly spotted one bear box/food locker to the right of us. Not sure if there was more than one, though. The area seemed a little crowded, different colored tents glistened in the morning sun. It was a cheerful sight! But we were glad to have had our previous night's camp all to ourselves. No one but ourselves to hear all our complains of aches and witness us lick our wounds! Haha. 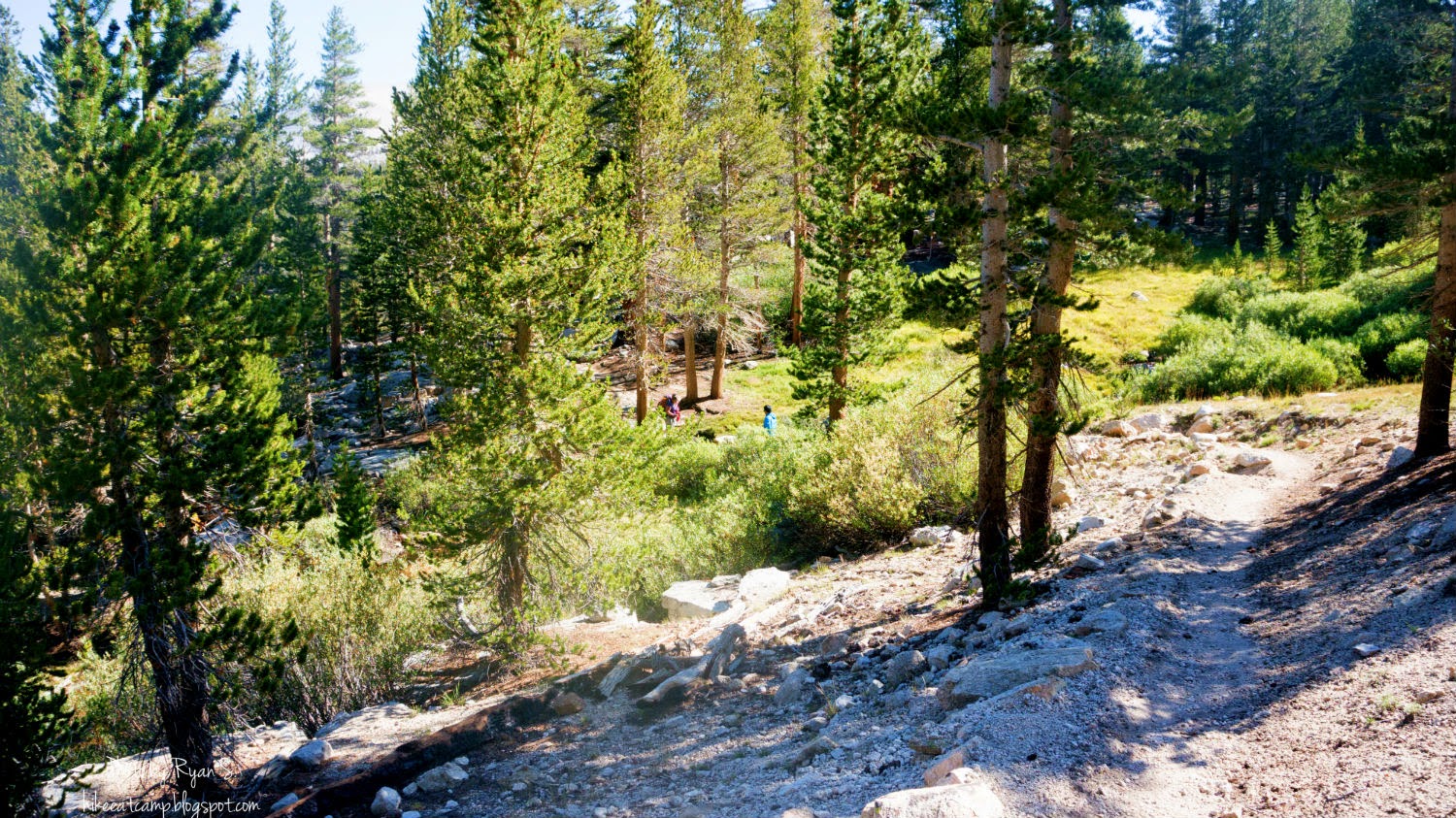 Passing a few more tents down the trail and crossing a small stream, the trail started going uphill and continued on to some switchbacks. The High Sierra Trail we've been trekking on has now merged with the John Muir and for a short period, the Pacific Crest Trail, as well. We're now getting a preview of the last portion of our future JMT adventure! 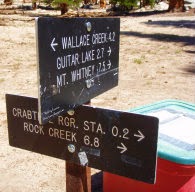 We hiked on towards and thru a very beautiful Crabtree Meadow (though I'm still partial to Sky Parlor Meadow.. shhh!). The PCT portion we've long since left, but we're still trekking along with the JMT. The trail continued on through before starting a short ascend to an exposed portion and we walked up to the trail sign pointing to the Crabtree Ranger Station. There was a plastic container right next to the sign containing Wag Bag Kits. 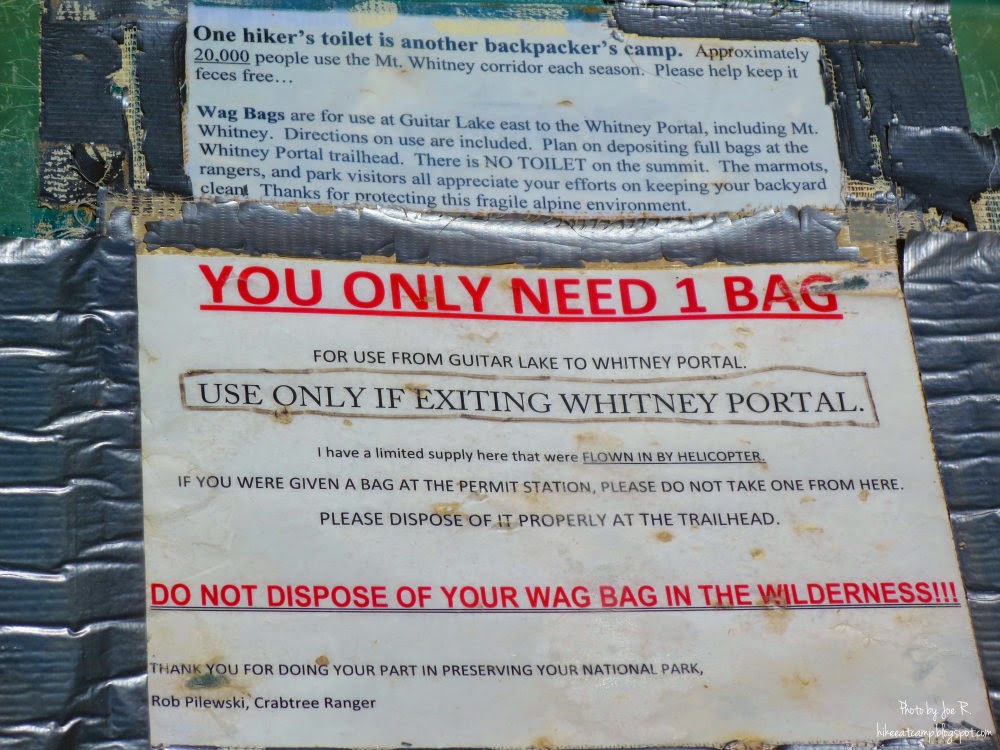 Wag Bags are now required from here on forward till we exit the Whitney Zone, which is by the Lone Pine Lake junction via our exit trail to Whitney Portal. Digging cat holes to dispose of human waste is no longer allowed on these parts.They are to be packed out.

I love how thoughtful these kits were.. moist towelettes! Ha!

If you weren't provided a kit before you took off to this area, this is the chance to pick one up before you go. It's multi-use, just need one! 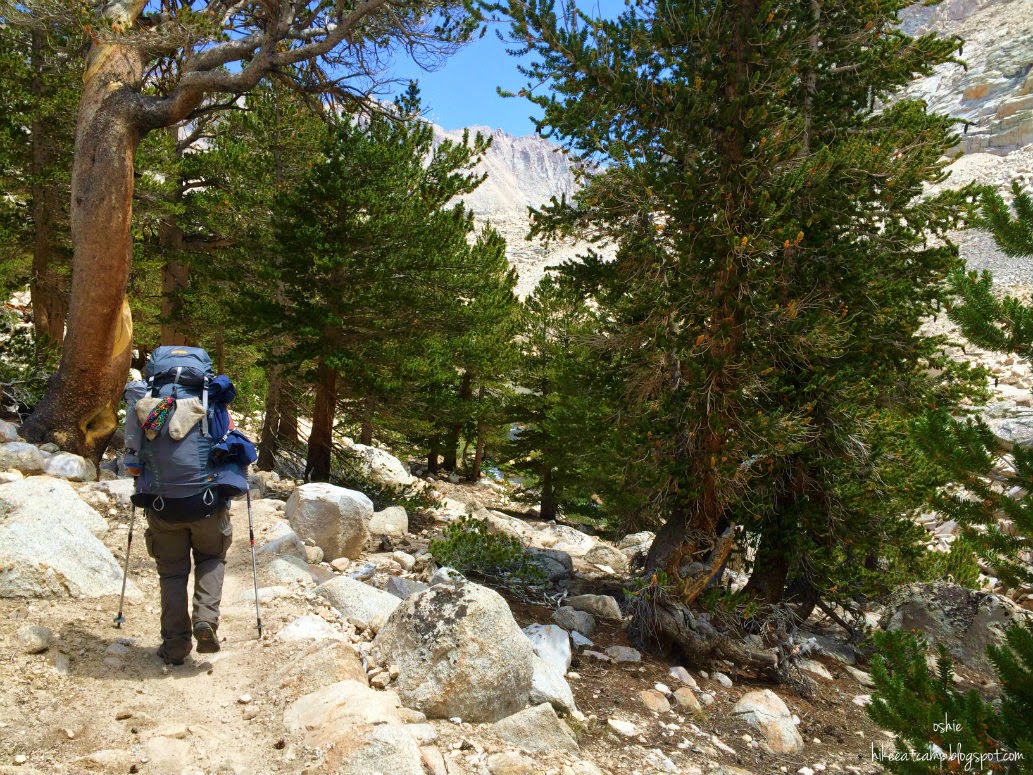 Had a quick lunch break here watching and greeting a hodge-podge of hikers pass by. We didn't get to spot the ranger station but did see a couple of tents pitched up just a walk on a spur trail below, on a shaded clearing. Looks to be a good spot to camp! Written guides note a bear box/food locker here but we didn't see one. Must be closer to the ranger station.

Continuing on, the trail was a bit exposed to the mid-day sun letting us play the "chase-the-tree-shades" again. Taking mili-second breaks against trees giving a bit of shade.

The scenery along the trail eventually opened up to a very serene lake, named Timberline Lake (no camping nor grazing!). 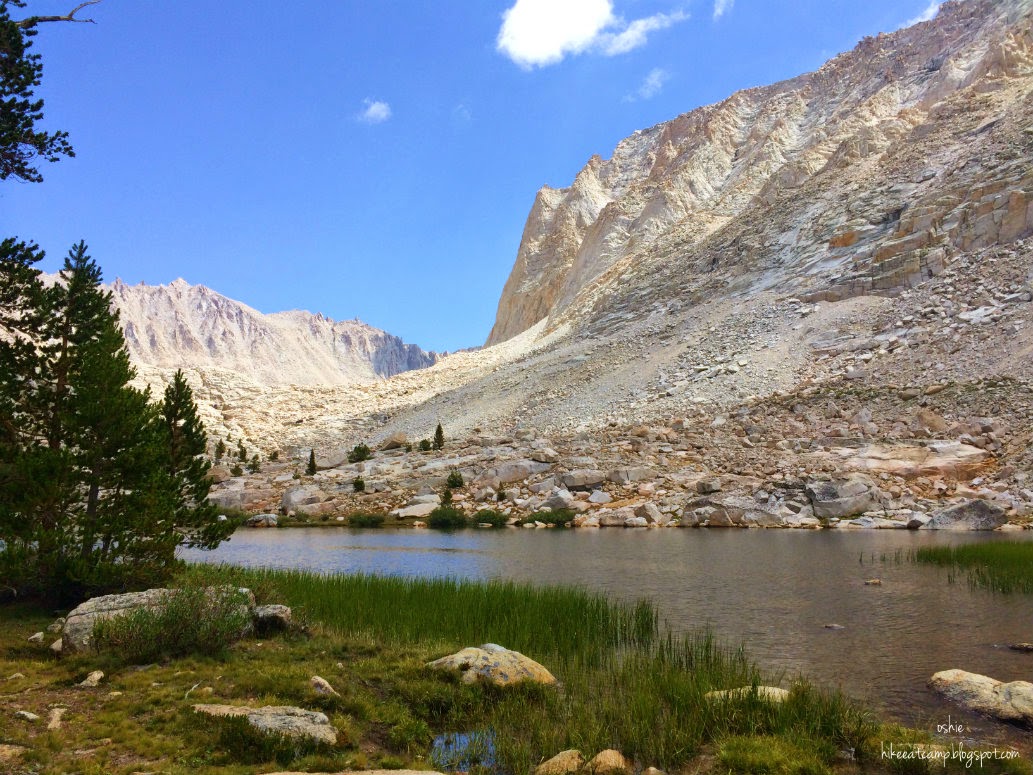 Then the trees started becoming more and more sparse. Making the trail more and more exposed to the sun and we were seeing less and less greenery. But the views started on another level of grandeur scenery of strewn boulders, spires, granite rocks against blue skies. We're getting closer to our stop for the day, Guitar Lake. 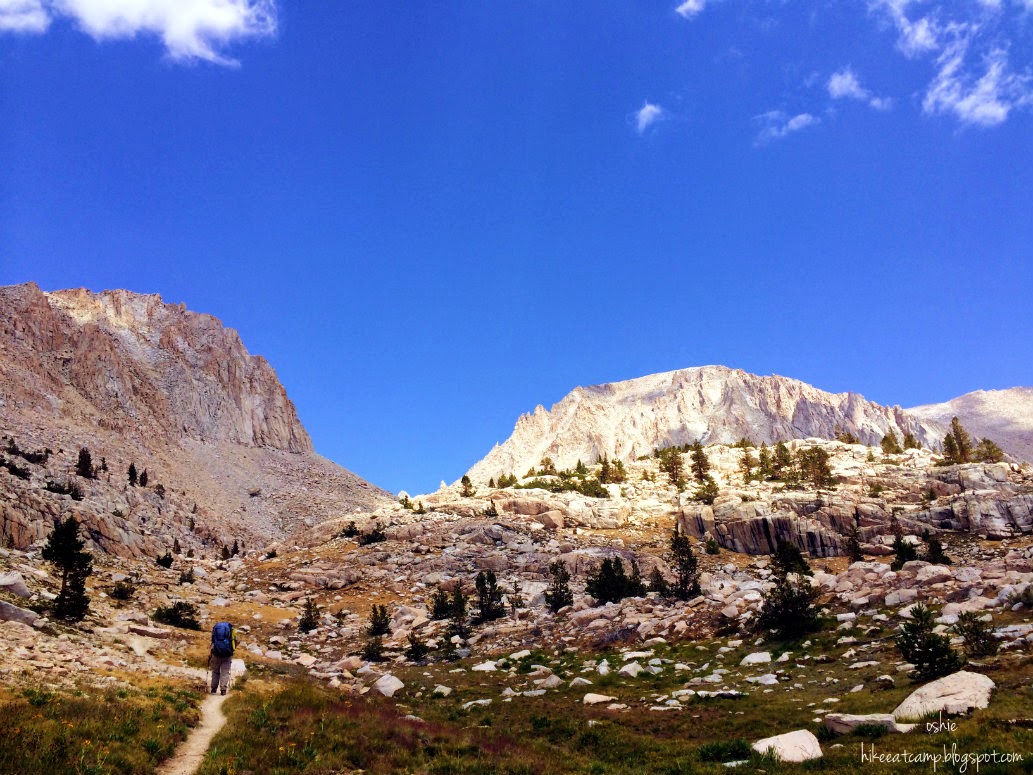 It didn't take long for the trail to take us to our "resort" for the day. We arrived with time for a late lunch spread, chill time and Joe's brave plunge into the cold waters of Guitar Lake.

Backpackers pitching up tents were strewn across the open area made it a busy place. Even though the day is far from over, hikers have stopped here catching enough rest to get an early start for tomorrow's trek up to Whitney and back down the other direction and out to Whitney Portal.

Finding a flat spot against something to block the wind was a task, everyone was looking to block the wind sweeping in the big bowl we were in. A small patch of dark clouds taunted us with a storm but only let out a small afternoon rain, all the while the sun still shining! We have a saying in my home country that goes along with this weather "anomaly" of raining while the sun shines: "May kinakasal na Kapre" (translation: A wedding with a Kapre is taking place.) And today reinforces its myth. For a "Kapre" supposedly lives under/by big trees and there are zero trees surrounding us that moment, not even a small one! Suffice it to say, it was safe to enjoy the weather outside, Kapre-less. 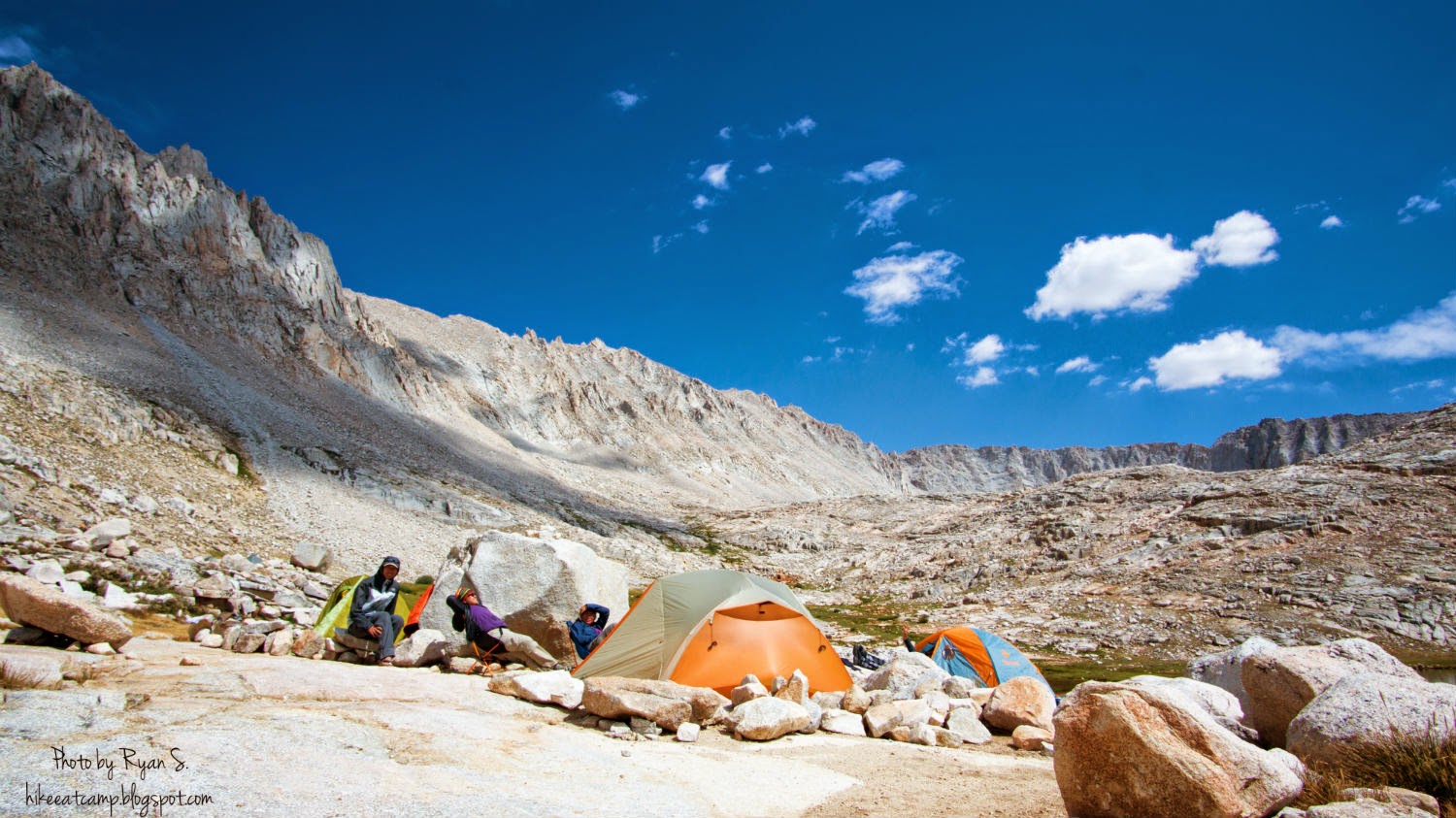