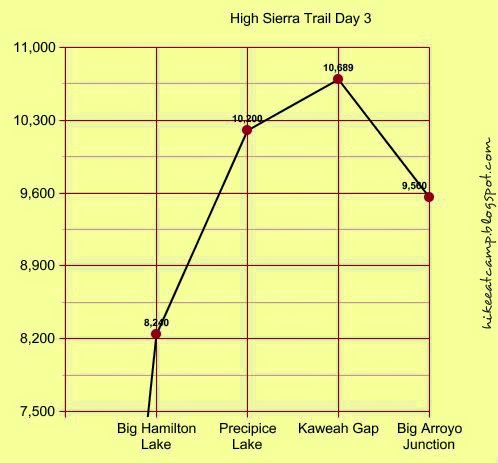 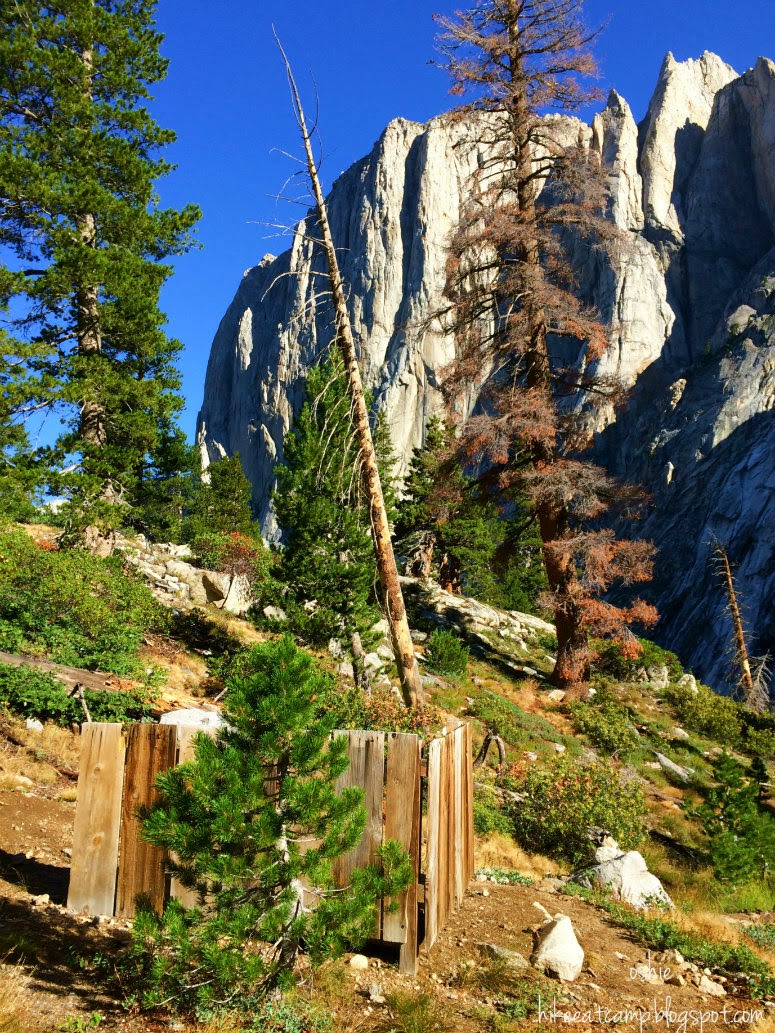 And it's Precipice Lake Day! The lake that started me planning this trip shenanigan that we embarked on. And we'll be climbing 3 miles and 2,000 feet for it.

We had plans of setting out early today so we can take a leisurely break at the lake, but got held at breakfast talking it up with one of the many very interesting hikers we would meet on this trip. And it is true, those whispers about the outdoor community, that we all can talk... a LOT.

We laughed, shared stories, backcountry finds, talks of home adventures with her. This was our first day getting sucked in the El Vortex, as we have dubbed the situation. Eventually, we would come to find out that it was hard to resist getting vacuumed into it.

Taking advantage of the El Vortex though, we actually got to properly dry our tents and other stuff that had been wet ever since we started the trip. They were all gloriously laid out in the open and letting the sun take all the moisture away. 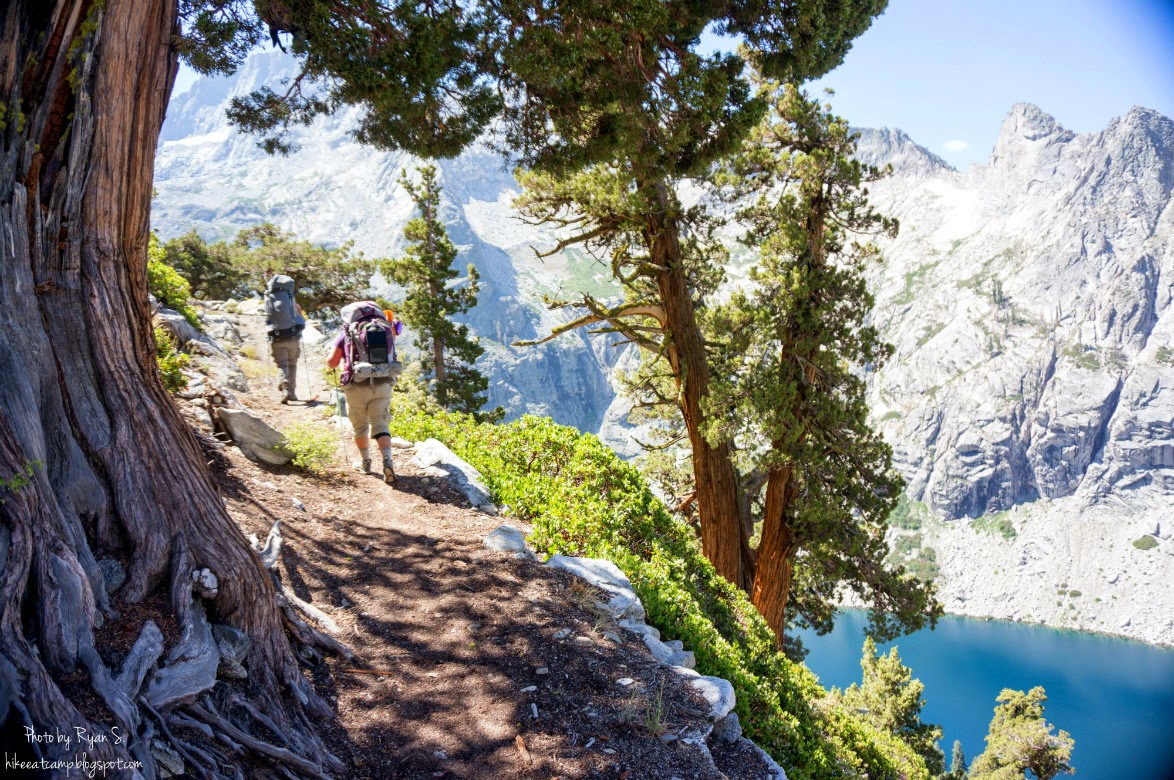 We bid adieu to our beautiful spot at Hamilton Lake. The trail continues on other side of Hamilton Creek and starts to climb up the exposed trail, where we saw the boy scout troop disappear to earlier that morning. Watching them over breakfast gave us an idea how high we were going to be for the first leg of the day's trip, mentally preparing us.

Not even a mile in, our previous campsite seemed so far away already. We can spot it way down below us. After a few long and short switchbacks, the trail continues on and in one turn, reveals just how much effort was put into creating this trail. The Hamilton Gorge Tunnel was of amazing work. Kudos to the trail engineers and crews! 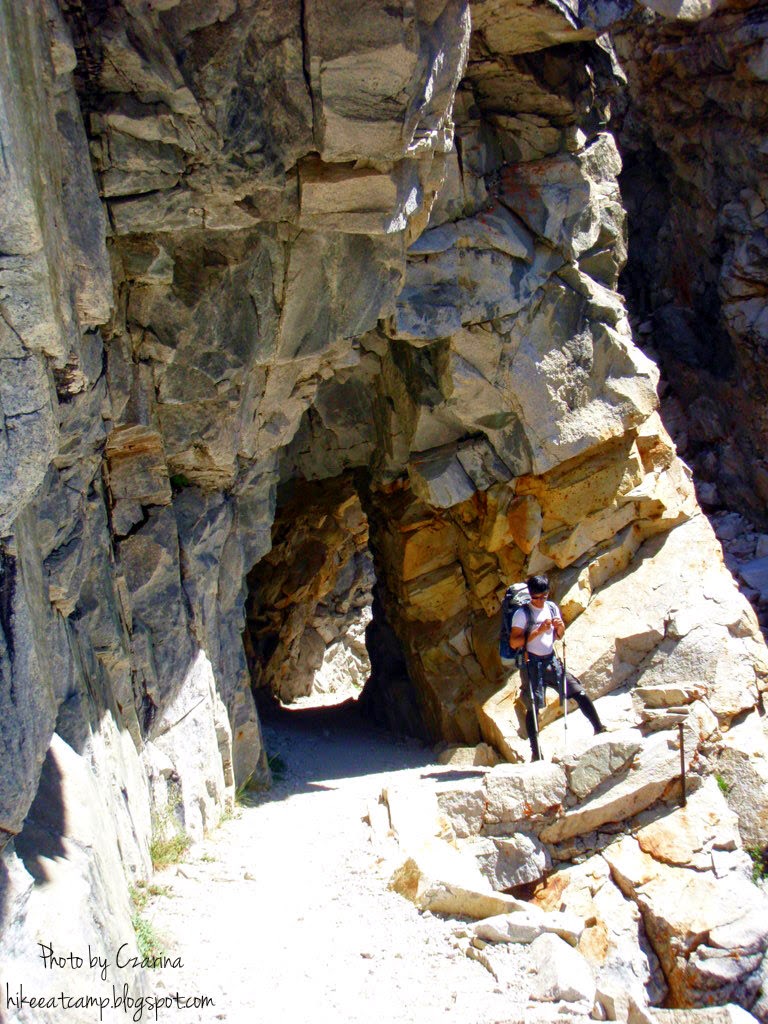 Passing through the tunnel, the trail bends into a form of a horseshoe, and continues on, crossing a waterfall. This cascade of water must be a sight to see (and cross) after a good wet winter season would pass and would have a good amount of snow melt cascading down the slope. 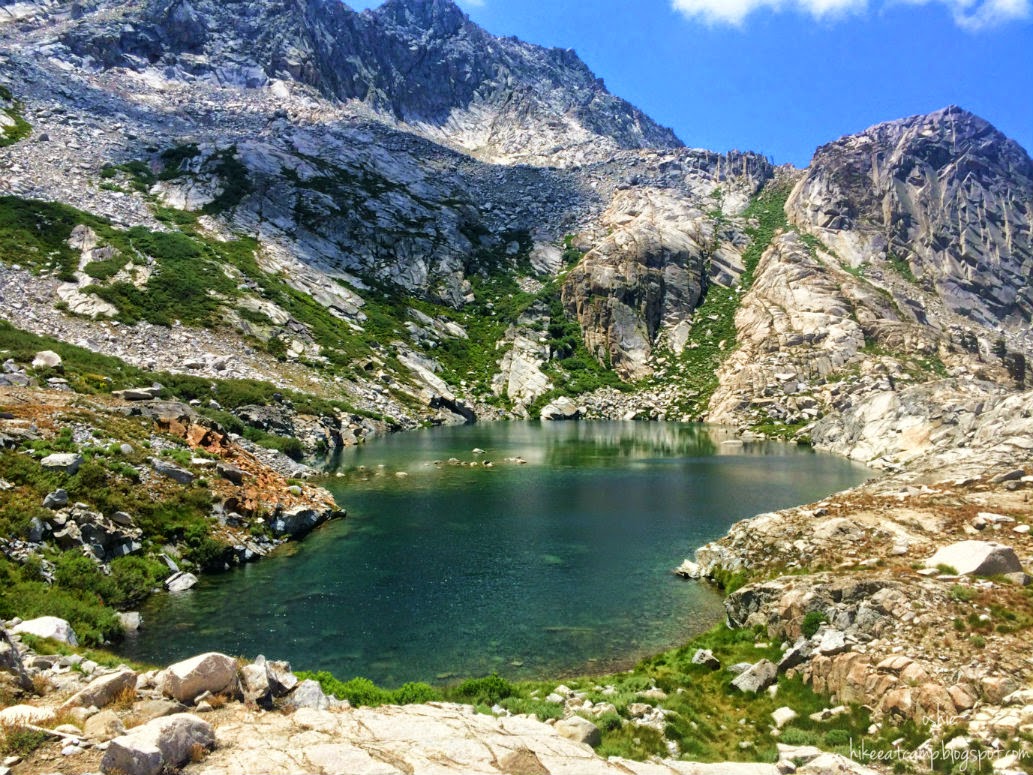 After about a mile or less, there's a body of water pretending to be the infamous Precipice Lake. But don't fooled by this impostor of beauty! Just kidding. Although it is truly not Precipice Lake just yet, it is still a beautiful lake. Well, all lakes are beautiful in my book, anyways. And although, it looks like it is a good spot to stop and take a break, the lake made famous by photographer Ansel Adams, is  just close by. We only stopped here long enough to take a few goofy photos and gaze up where boulders are hiding our targeted lunch spot for the day.

We climbed a few feet more and could see the granite wall that I know is the backdrop of the lake I've been day dreaming about since.. forever. It was a tease. So close, yet so far was on repeat on my mind to prod my feet to keep on moving. 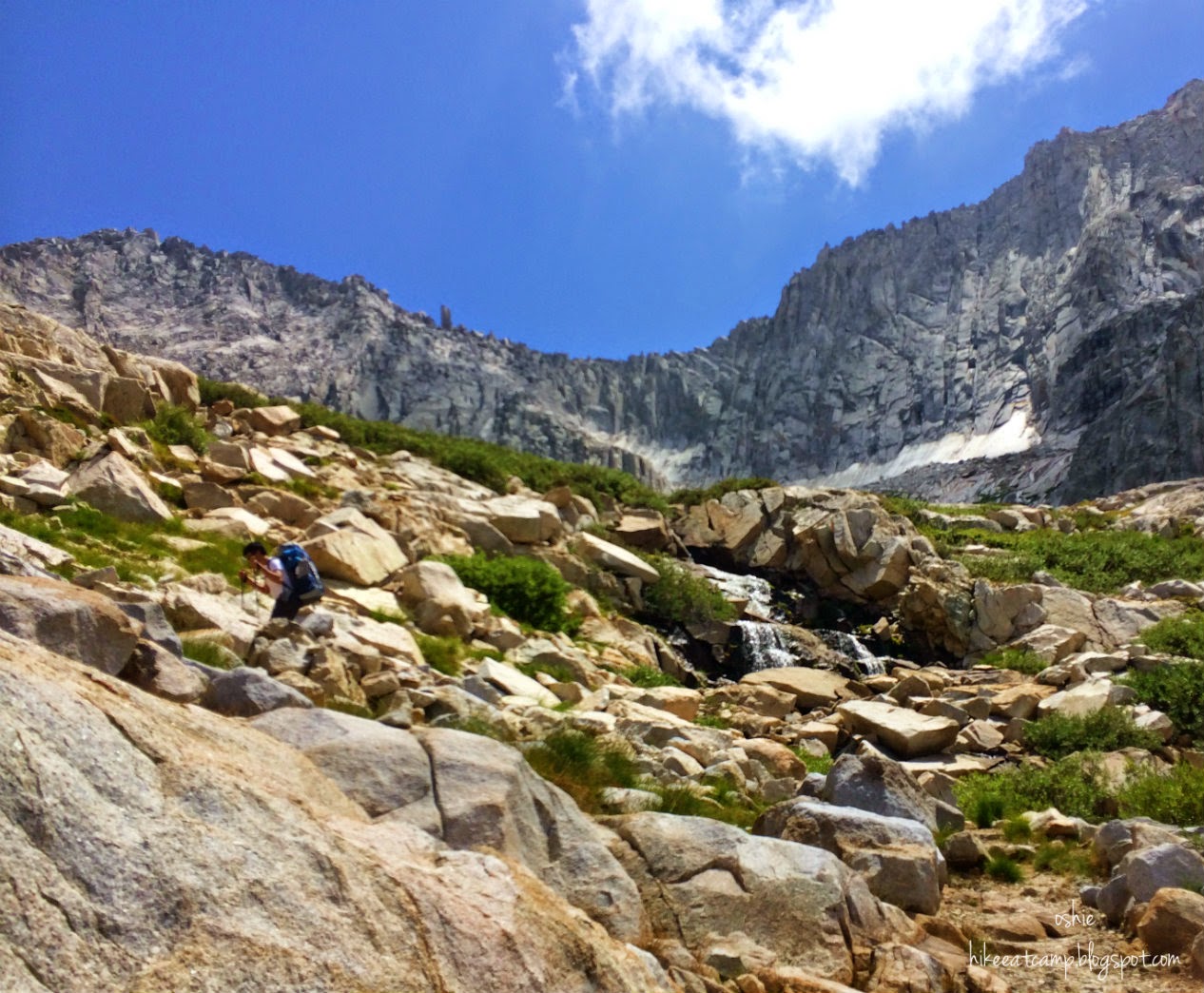 The first glimpse of water I saw, I ran the rest of the trail that remains between me and the lake. Found a good spot away a little off the trail and closer to the water. Unceremoniously dropped my pack and didn't care what the rest of the day will bring at this point. In my mind, I have arrived. 10,200 feet from sea level and away from civilization, I am at Precipice Lake. 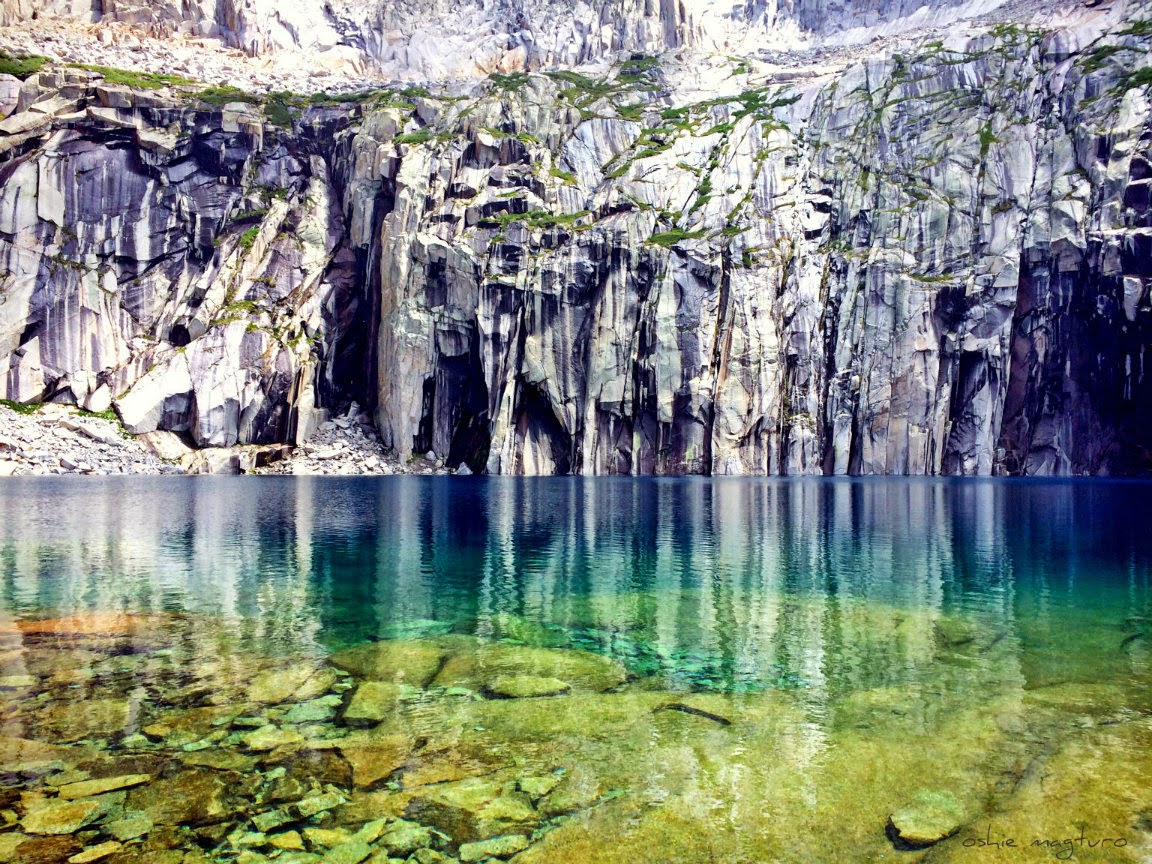 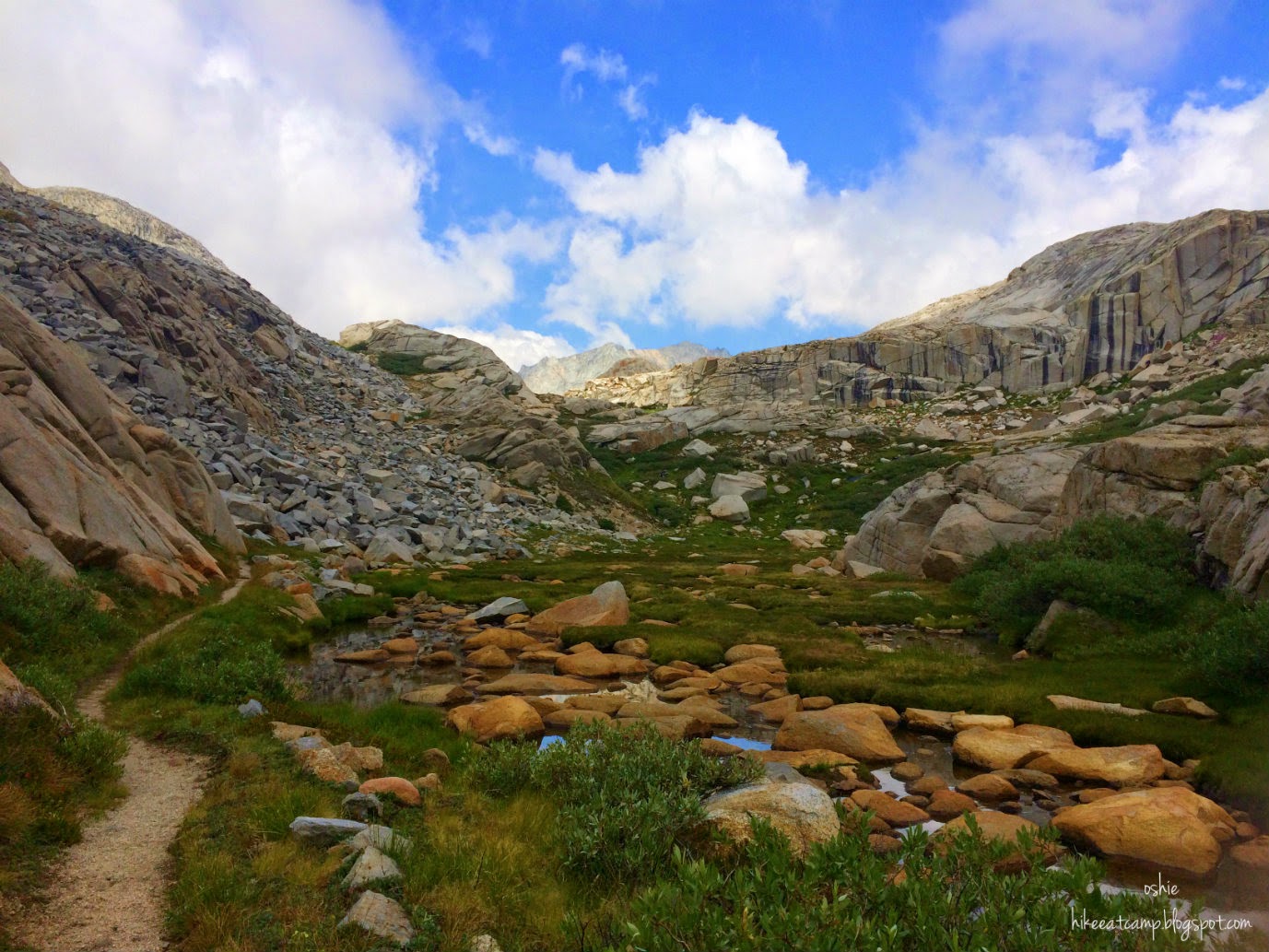 We had a leisurely stop here for lunch, naps and some photo overload. The colors on the lake were constantly changing as the sun started to play hide and seek among the clouds. We would have stayed longer if the clouds didn't didn't completely decided to hide the sun from us. And thick clouds then started to cover the peaks above. Wind started to pick up a bit, as well, so we unwillingly collected our lunch spread, filtered more water and hopped our way back on the trail. It was still a 400 feet climb to Kaweah Gap with a very short distance to hike before we can start our 1,300 feet descent.
Most of the climb was at the start and once we lost sight of the now gloomy looking Precipice Lake, the trail became more forgiving on our legs. We passed a couple of lakes before finding ourselves on Kawaeah Gap.

The view of the Nine Lakes Basis was so grandeur standing at the base of Mount Stewart on Kaweah Gap. A plaque for Col. George W. Stewart, named as the "Father of Sequoia National Park" was placed here by the National Park Service in his honor. 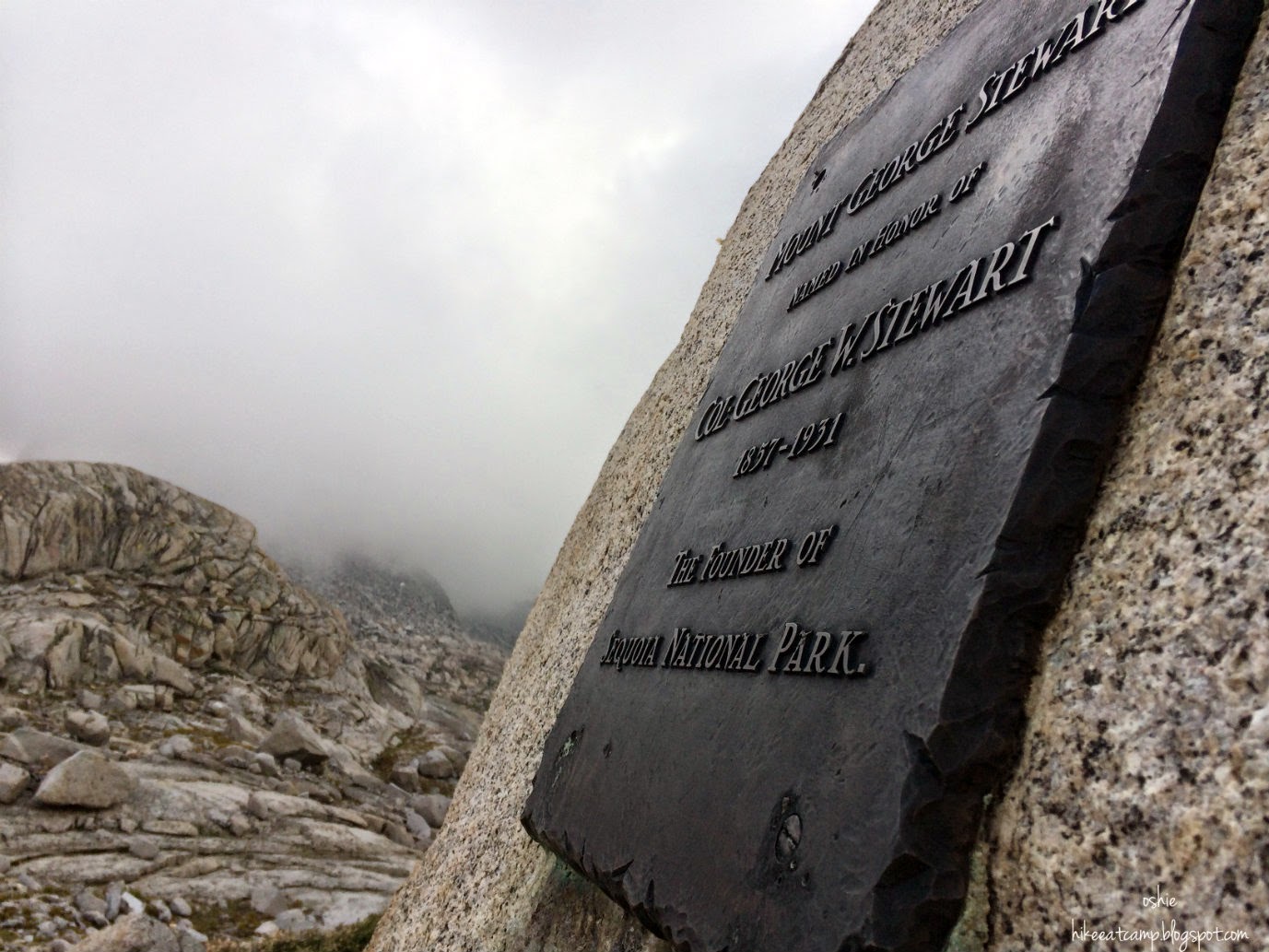 The trail continues along a few switchbacks, descending on to the valley, a grand open space with the Big Arroyo running in the middle of it. Descending, I felt like we were in a cartoon of dog-cat-mouse chase. We found ourselves chasing the blue skies just ahead of us while dark ominous clouds were not that far behind us, nipping at our heels. 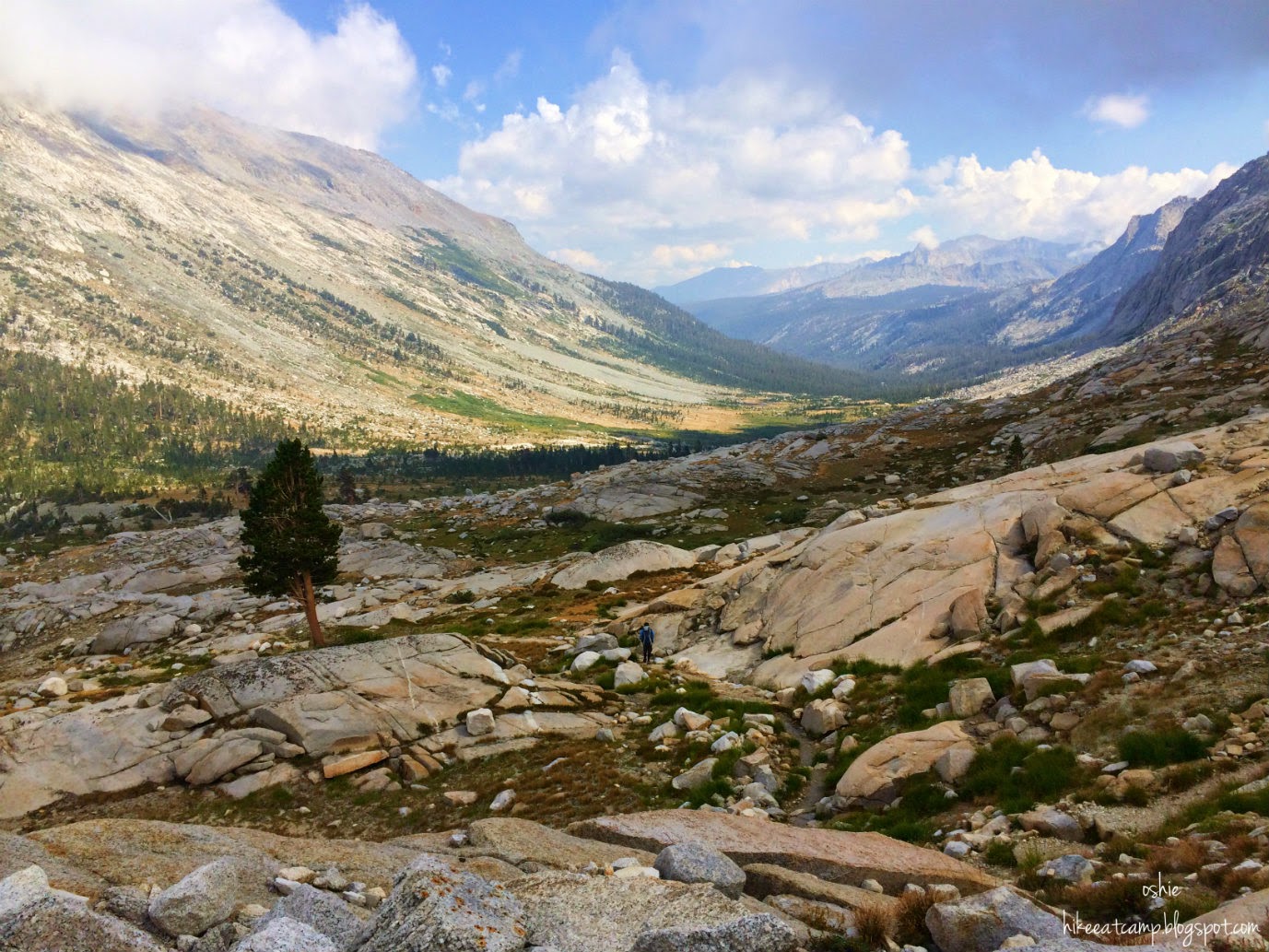 The trail eventually flattens and follows the river downstream most of the way, then eventually crossing it and continuing on through to enter a thickening wooded area. Water level was low at the crossing but as expected, freezing. 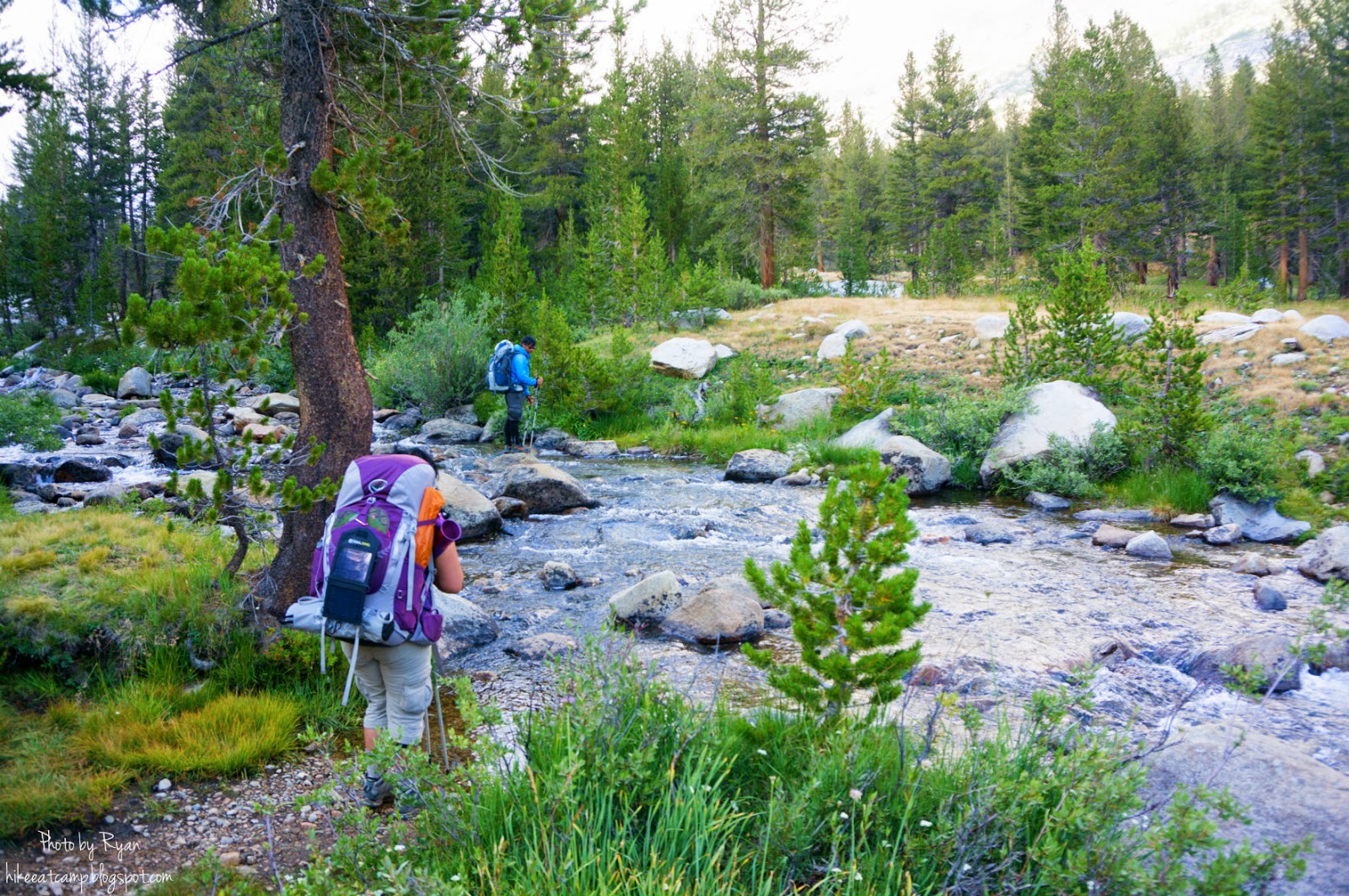 The trail splits with the right fork directing to the Big Arroyo Patrol Cabin and the left fork continuing on the High Sierra Trail. Leaving the left fork for tomorrow's journey, we made our way to our home for the night. 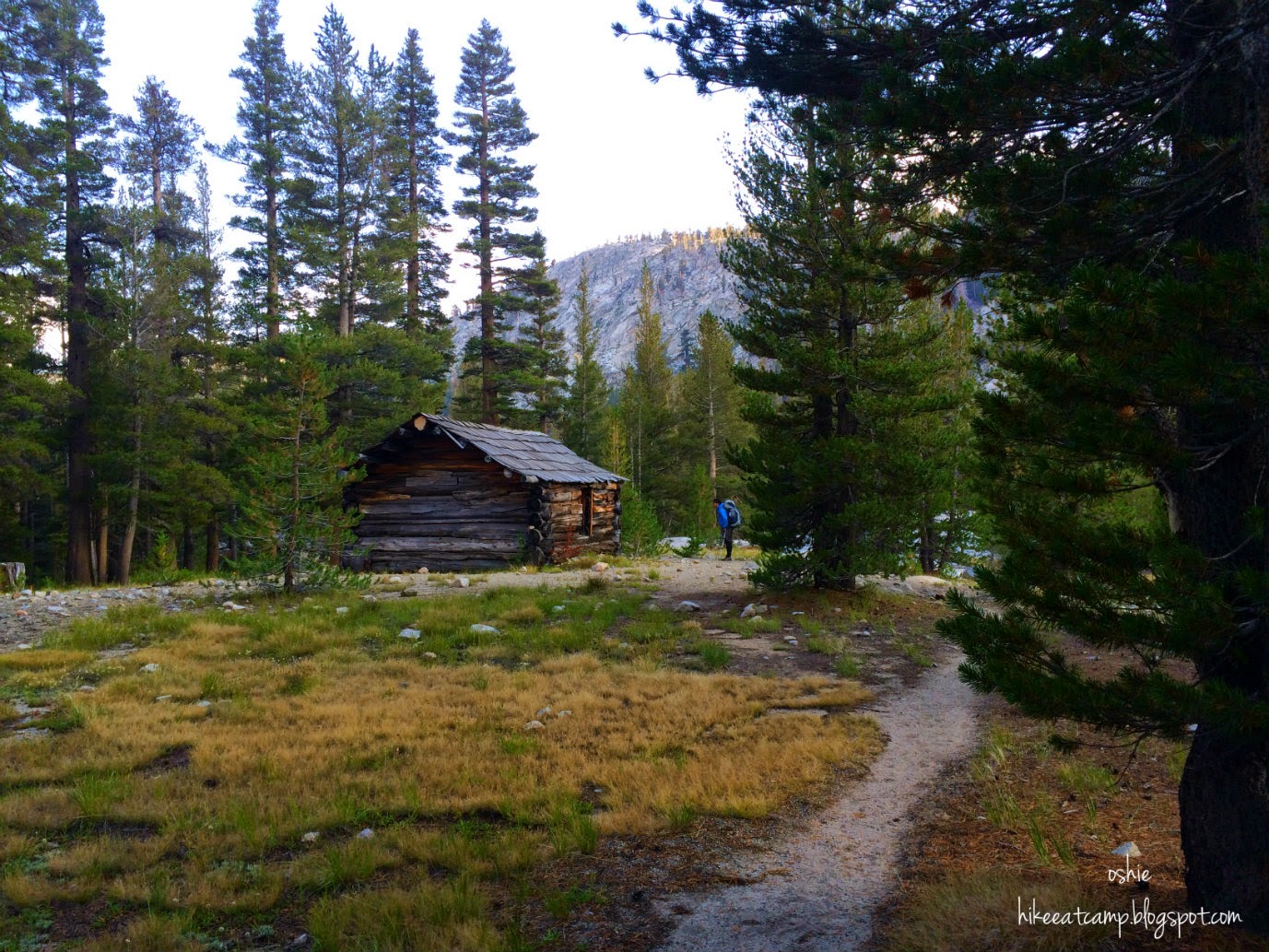 Several camp sites can be found just beyond the Big Arroyo Patrol Cabin. There are food lockers in this area. And for the hammock campers, lots of trees to hang your bed for the night. We waved to a few campers we've met and leaped-frogged along the trail, and found a cushion-y spot to pitch our tents. Mosquitoes have not been a problem since we started this trip. Probably due to the dry winter we've previously had. With that in mind, we still had a good number of mosquitoes pestering us here. I can only imagine what's it like during a normal season, in the beginning of August.