It was a gorgeous Saturday to be outside and what better way to spend the day than to give back to the park that has always been there to aid in my nature wanderings.. and plus there's a bonus hiking/ tour at the end of the day! 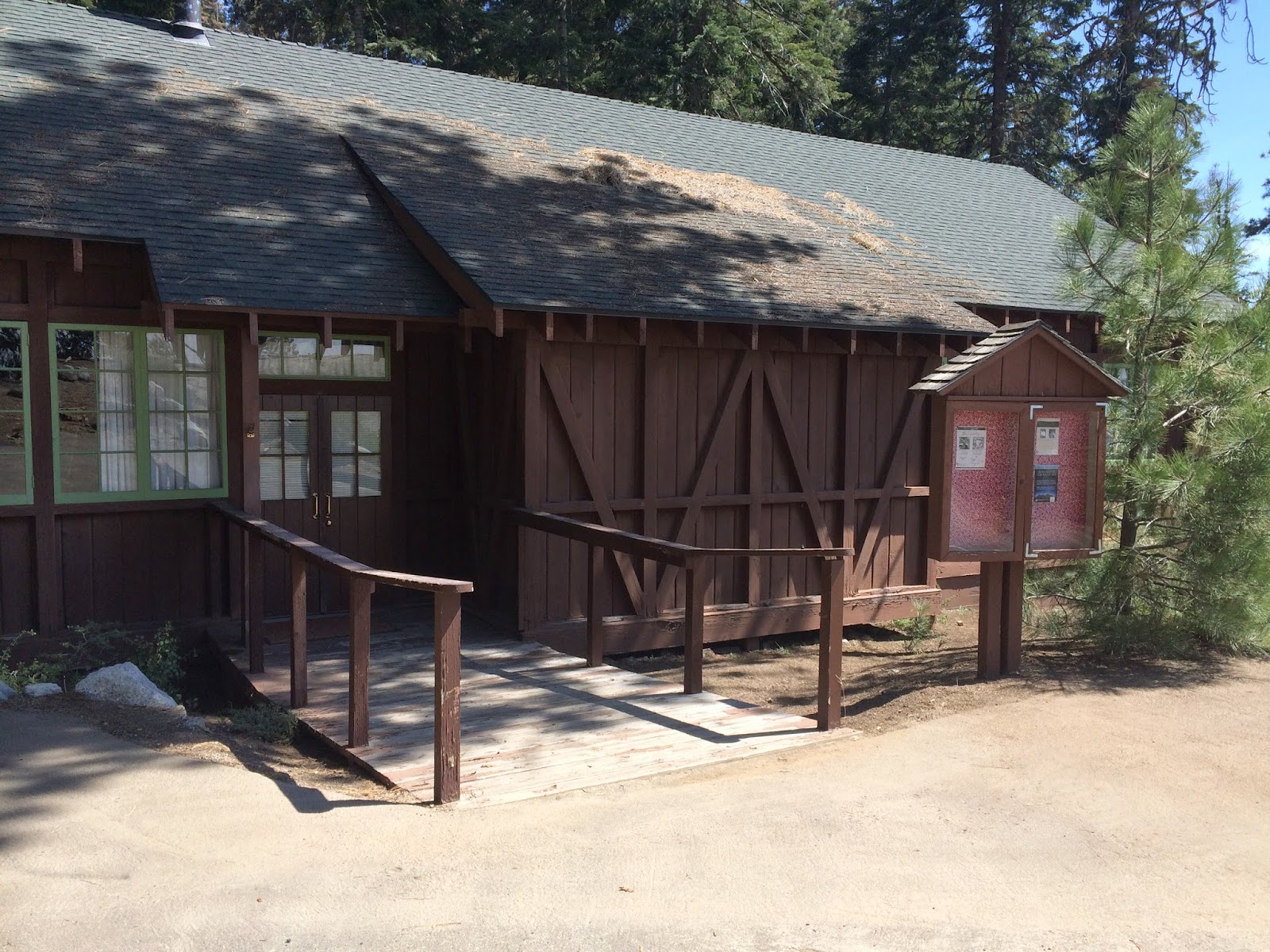 In the early era of Sequoia National Park, the Giant Forest area was the hub of everything in the national park, kind of like the Yosemite Village, at present, in Yosemite Valley. This area of the park had about 300 hundred structures built around, including tent cabins, a market, a bar, a gasoline station, park employee housing to name a few. It's a hubbub of activities.

The park service and naturalists that guarded the motto "Preserve and Protect" became concerned that the congestion of activities are affecting the environment of the Giant Sequoia Trees that this park protects. By 1998, for the safety of Giant Sequoia Trees and it's visitors, the Giant Forest Village was shut down. Then most of all the buildings were removed and some were moved, like the Post Office to the Lodgepole area, except for the market and the Beetle Rock Hall.

The former market (and I was told, also housed a bar) was changed and is now currently serving as the Giant Forest Museum with the General Sherman Tree standing tall and proud in front of it.

The Beetle Rock Hall used to be the recreational area for all the park employees to use, but now serves as an educational center to learn things about how Sequoia National Park was before and as a historical landmark.

In 2012 the Beetle Rock Educational Center was closed due to budget constraints and underwent a review as to it's future purpose and usage. But not wanting to lose this historical site, if it will not be utilized, the Sequoia Natural History Association (SNHA), plans to open it this 2014 summer, for leaning about history and will include the Summer Barn Dance on Saturday nights.

I received an email from SNHA regarding a one day weekend clean up event for the Crystal Cave that includes a private-before-they-open-it-to-the-public nature tour of the cave. I jumped on the phone and called in to register. I have been to the cave, Kari hasn't, and I thought it'd be a cool way to spend the weekend. Throw in some good karma into the world, plan our own camp out and a day hike or 2.

However, they only had space for one volunteer and I wanted this an activity for both Kari and I. So we accepted to get assigned to the Beetle Rock clean up, instead

We met at SNHA HQ for a quick orientation, before the convoy of official and civilian vehicles made it's way to our respective destinations, with the convoy breaking up for the cave volunteers to leave the Generals Highway and veer towards Crystal Cave and us continuing more up the highway to our own location.

We soon reached our destination, parked our vehicles and grabbed our gloves & water bottles. We were a smaller group, just 6. It seems Kari and I were the only first timers and more seemingly the only "outsiders". We were with 3 naturalists and employees of SNHA and (I'm going to guess on this since I didn't' really get to ask) a long time friend of the association. We may be new faces to the vets but they sure didn't let us feel like outsiders. Outdoorsy folks are always good-natured, I guess. 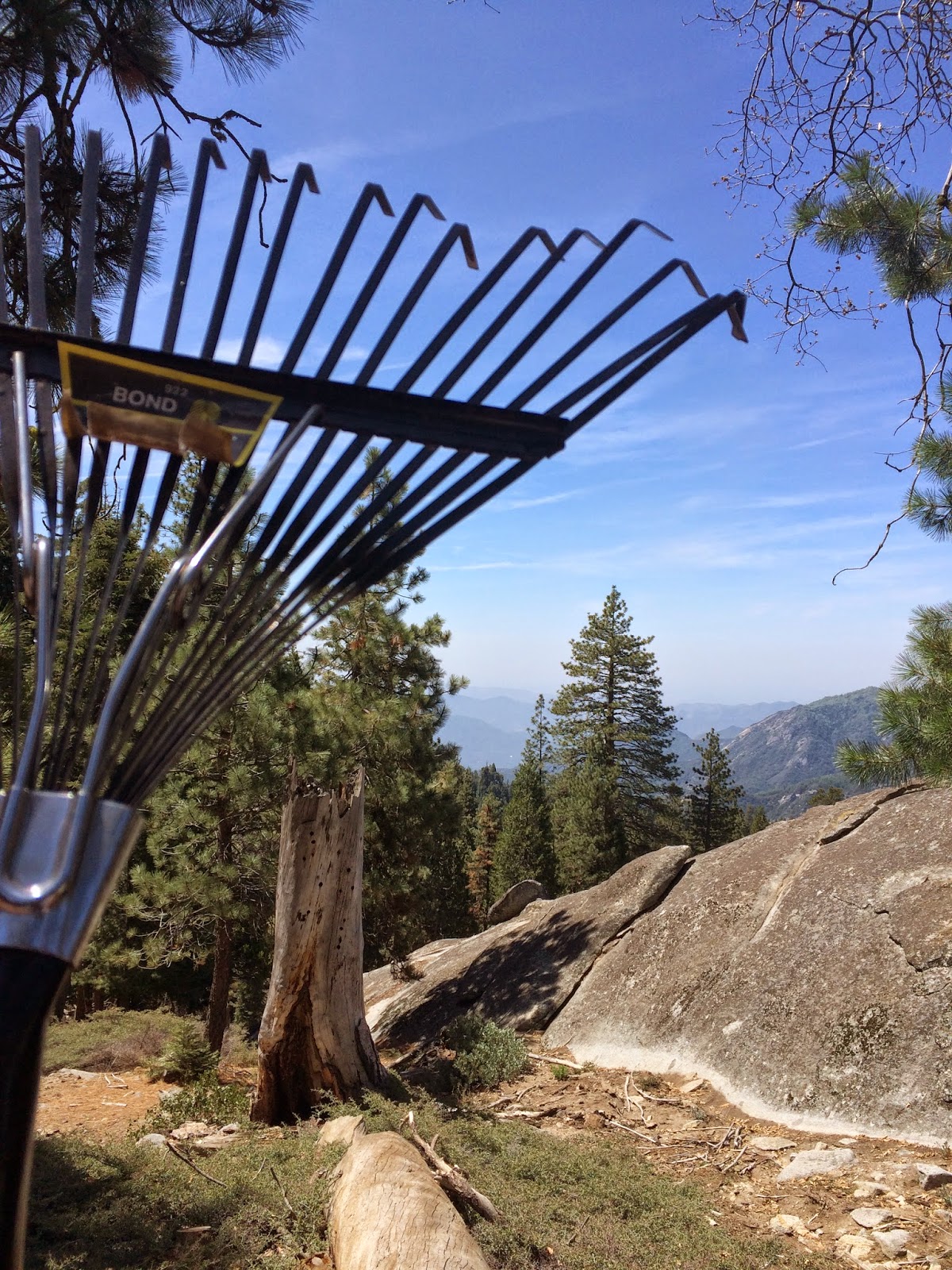 We got a brief history background of the building from our activity leader, Tara, before we started with work outside of the building. Fire-proofing it by clearing the pine needles on the roof, raking off the immediate surrounding of the building and clearing any debris left from whatever winter left (not that old man winter really paid attention to California this season.. but still.). Though I have never raked in my life (we owned an outside broom made of dried palm stalks growing up, never owned a rake), I had fun! Serious work out I must say. And with a view, this beats going to the gym!

We took our lunch break on the newly cleaned deck. A good spread of build-you-own ham sandwich, an assortment of fruits, vegetable and cookies provided to us. We enjoyed some Sequoia NP history, hiking, backpacking story swapping before we had to break that up and go back to work, cleaning up indoors.


Now, I am not a rodent lover, nor am I fascinated with them one bit or anything associated with it. I just can't stand it. Some people fear spiders and snakes, mine is this. So, it was with great zen like mind control that I had to play in my head in order for me to start and finish the clean up inside.

The place was the party hub of every sized rodent, I think, in the park! There was rodent poop everywhere and of every size! It got properly soaked with bleach first before we started sweeping them mopping around (safety first! No Hantavirus, please!). Kari and I took the big hall area, while the others took the other sections of the building. Boy, was I happy when our leader declared at 3 p.m. that we were done for the day! I'm done finding poop surprises! Haha.

We closed up shop and the building will be for inspection the coming week, I think. Hopefully, in between now and then, no more rodents will make a temp home of it. Yeah, sure. Haha.

We were gifted with a short but informative nature tour after our day's work, but that's for another post!